Balenciaga, an history of Fashion

Cristóbal Balenciaga famously only ever gave one interview during his lifetime and when one considers the reverence with which other designers, both contemporaries and contemporary, speak about the man it is perhaps unsurprising that he let others, inadvertently, to do the speaking for him.  “Haute couture is like an orchestra whose conductor is Balenciaga”, said Christina Dior while Hubert de Givenchy went as far to say “I don’t think the Bible has taught me as much as Balenciaga”, with meaning no less significant even in these more secular times.
Words and praise, while not cheap given the mouths from which they come, are not wholly necessary when the magnitude of the legacy is as great as this. Rightly regarded as the master of haute couture, his exquisite craftsmanship and pioneering use of fabrics set standards that resonate through the fashion world today and what remains is some of the most beautiful clothes ever made for the female form. Beyond platitudes, there remains only the work.

The V&A’s small but exquisitely satisfying current exhibition, Balenciaga: Shaping Fashion, focuses on the latter part of the designer’s long career with emphasis on the 1950s and 60s – considered to be perhaps his most creatively fecund period. During these years he dressed some of the world’s most influential and wealthy women, mainstays of culture, institutions and the upper-echelons of society while introducing shapes and designs considered revolutionary at the time – the tunic, the sack, the baby doll and shift dresses – that remain staples of style to this day.

On display are over 100 garments and 20 hats, many of which have never been seen on public display before. These are accompanied by archive sketches, patterns, photography, fabric samples and catwalk footage and for the first time the museum has used x-ray technology to take forensic look at details of Balenciaga’s designs hitherto unseen.
Cassie Davies-Strodder, the exhibition’s curator, said: “Cristóbal Balenciaga was one of the most influential fashion designers of the 20th century. Revered by his contemporaries, including Coco Chanel and Hubert de Givenchy, his exquisite craftsmanship, pioneering use of fabric and innovative cutting set the tone for the modernity of late 20th-century fashion.The exhibition shows his lasting impact on fashion through the eyes of those who trained with him and through recent garments by designers including Molly Gollard, Demna Gvasalia and J.W. Anderson who reflect the legacy of his vision today.” 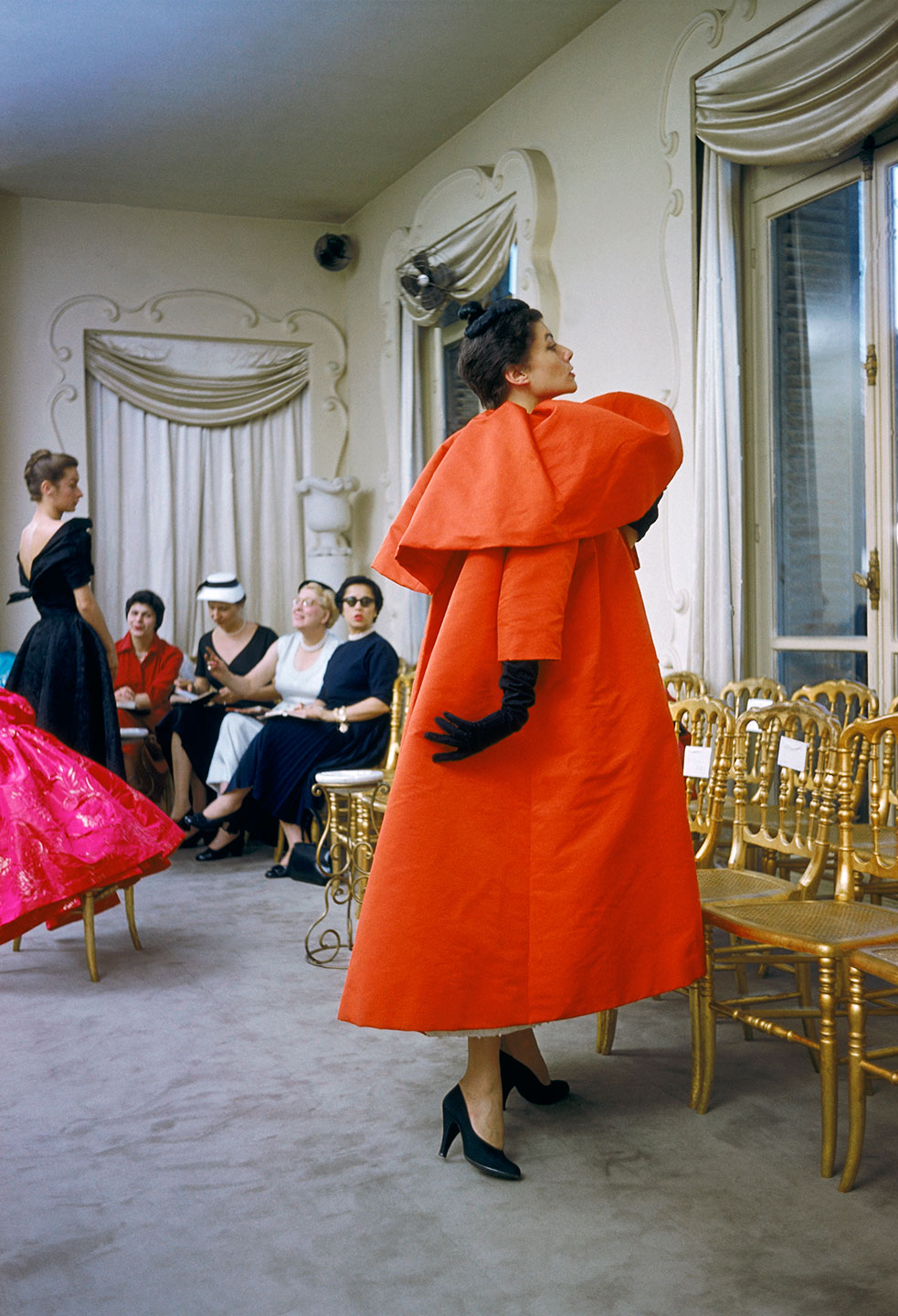 “If Dior is the Watteau of dressmaking – full of nuances, chic, delicate and timely – then Balenciaga is fashion’s Picasso. For like that painter, underneath all his experiments with the modern, Balenciaga has as deep respect for tradition and a pure classic line” – Cecil Beaton

Lisa Fonssagrives-Penn wearing coat by Cristóbal Balenciaga, Paris, 1950. Photograph by Irving Penn © Condé Nast, Irving Penn Foundation.
“Balenciaga alone is a couturier in the truest sense of the word. Only he is capable of cutting material, assembling a creation and sewing it by hand, the others are simply fashion designers” – Coco Chanel

Above: Balenciaga debuted the ‘baby doll’ dress in 1957. When made with opaque fabric, it completely concealed the shape of a woman’s figure. In tihs particular example, Balenciaga was both revealing and concealing the body. The translucent Chantilly lace hangs loosely over a fitted inner sheath with zips on both sides to ensurea tight fit.

Above: Although best-known for his Parisian couture, Balenciaga often drew on his Spanish heritage in his designs and influnence. The earliest piece in the exhibition, this evening jacket is based on the short chaquetillas worn as part of the bullfighter’s traditional dress referred to as ‘the suit of lights’.

Balenciaga: Shaping Fashion is open now at the V&A Museum until February 18th, 2018.

Who is offending by Fendi now ??? 😁😁 Availab

Let's go again for the gym. As we say, no pain no

New one, new classic customized by our artists. #P

#tbt When it was the time to send packages during

Kenzo it's good, but what about Benzo ?? Discover

We celebrate a good news : we have new fashion lux

Who is offending by Fendi now ??? 😁😁 Availab

Let's go again for the gym. As we say, no pain no

New one, new classic customized by our artists. #P

#tbt When it was the time to send packages during

Kenzo it's good, but what about Benzo ?? Discover

We celebrate a good news : we have new fashion lux